In June 2020 we embarked on a mission to colour ring as many swans as possible across Norwich to assess survival rates, movements, and numbers of Mute Swans using the cities waterways. In the previous winter we ringed about 20 Swans, so with these fairly low numbers we decided to join an existing regional colour ringing project rather than launching our own. Little did we know that we would blast past that winter’s totals, with the past year seeing us colour-ring 146 Mute Swans across Norwich, with 96 being new birds and 50 already sporting metal BTO rings. This was despite Bird Flu hitting our area over the winter, which forced us to stop ringing for 3 months, and saw a couple of deaths of our marked swans that may have been a result of bird flu (although the corpses were not tested). Other deaths of our marked swans that we know of were a result of dog attacks, of which there were 5 over the last year (2 marked adults, 3 unmarked cygnets).

Much of our ringing takes place in what we nickname ‘The Swan Triangle’, of Whitlingham Country Park (70 tagged), the Carrow Road Bridge area (43 tagged), and Thorpe River Green (22 tagged). These are the areas where public feeding of the swans is greatest, and areas where larger gatherings of swans come to moult and overwinter. These moulting birds and non-breeders make up the lion’s share of marked birds, but we do have a handful of breeding pairs across Norwich including pairs at Bowthorpe Southern Park, Wensum Park, and several at Whitlingham Country Park. 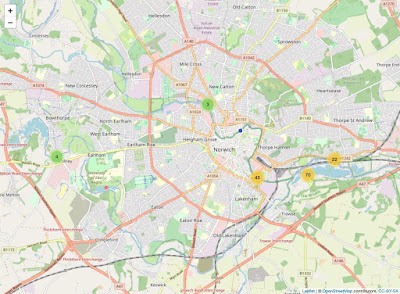 Map of locations where we have colour-ringed Mute Swans across Norwich. Numbered markers indicate the number tagged at that location, blue and red dot indicate a single bird (blue was a new bird, red was a bird already metal ringed).

With these 146 individuals we have gathered 855 sightings of our marked birds, which have largely been localised movements but also include a few further flung movements including one bird that went 218km SSW down to Eastbourne on the south coast. 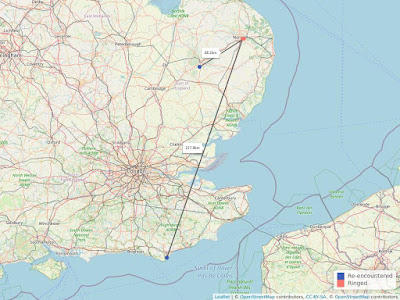 We are keen to get as many sightings as possible, so please keep them coming. That includes that same bird you see at Whitlingham on every visit, knowing it’s still alive and spending all its time there is still important data for us. You can report your sightings to us on our website and get instant feedback on the individuals life history: link.

Posted by Stephen Vickers at 14:31